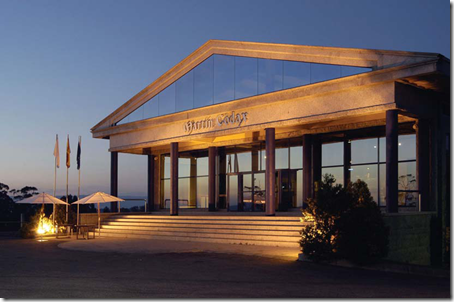 The Martín Códax winery was founded in 1986, as a cooperative made up of about 50 local grape growers in Galicia in the northwest corner of Spain.

The wines of Martín Códax were very well received in their first vintage, and the winery
expanded to meet the expectations of wine lover’s at home and around the world. To
maintain a supply of top quality Albariño grapes, the winery acquired vineyards of its own and crafted long-term agreements with many family winegrowers whose grapes met their exacting standards.

Today, the winery oversees more than 1,400 tiny vineyard parcels being farmed by 550 families in the Rías Baixas region around the town of Cambados. All the grapes that go into Martín Códax Albariño are estate grown and picked by hand.
Martín Códax maintains its quality through continuous investment in research, innovation, and talented, creative people who enjoy the challenges of leadership.
The “signature” wine of Martín Códax is Albariño, the versatile white wine, unique to the region, that has made Galicia famous among connoisseurs around the world.
The wines of Martín Códax have won international acclaim and are available for sale in over 40 countries around the world.

The Albariño wine of Martín Códax® is produced under the strict rules of the Rías Baixas D.O. (denomination of origin, or appellation). Translated from Gallego, the native language of Galicia, Rías Baixas means “the lower fjords”, referring to the deep fingers of water there that reach inland from the sea.

Albariño wine is sometimes called “The Wine of the Sea” because of the impact that the Atlantic Ocean has on the weather over the vineyards, and because the wine goes so well with seafood from the local villages. The moderate climate and well-drained soils provide perfect growing conditions for Albariño – ample water, ample sunshine in the summer, and mineral-rich soils of eroded granite sand, chalk, and clay.

The area is lush and green, unlike the common idea of Spain. It is cool, not hot, with many rivers running through hillside and valley vineyards. The landscape is so rocky that even the posts of the pergolas that hold the canopy of vines overhead in old farmstead vineyards are made of granite.

Winter storms on the Spanish shore of the Atlantic bring moderate temperatures and rain from the southwest, a result of the circulation of tropical air from the equator. The ocean regulates the temperature over the land, with little difference between day and night.

High pressure fronts from the Azores settle over the region in summer, giving a long,

friendly growing season to the vineyards, with the driest weather perfectly timed for late ripening and a September harvest.

Rías Baixas is divided into five sub-regions: Val do Salnes, Ribera del Ulla, Soutomayor, Condadodo Tea and O Rosal, the largest of which is Val do Salnes, home to Martín Códax wines.

Albariño, long the best-kept secret of Spanish winemaking, is making its mark in the world. It is aromatic, complex but immediately pleasing, dry, but full-bodied: peach, melon, grapefruit and lemon zest flavors decorating a frame of refreshing minerality.

This is a grape so special and so important in Spain that the grape itself is subject to regulation, not just the wine. Inspectors examine every load of grapes arriving at the winery to certify that they were grown in vineyards that meet the exacting standards set for Albariño in Galicia.

Albariño is made to be enjoyed when it is young, and the flavors float on a slight tingle that touches the tongue on the first sip. “Refreshing” is a word often associated with this style. To preserve the delicate qualities and subtle sequences of flavors that the wine so generously offers, winemakers restrict their fermentations and storage to stainless steel.

By Nancy Walman Copyright 2010 By Punch In International. All Rights Reserved Disclosure 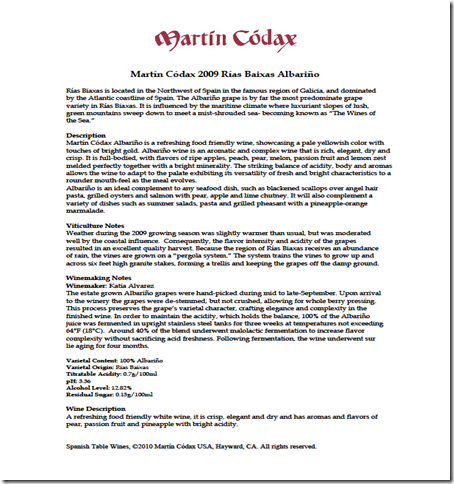 Copyright 2010 By Punch In International. All Rights Reserved Disclosure