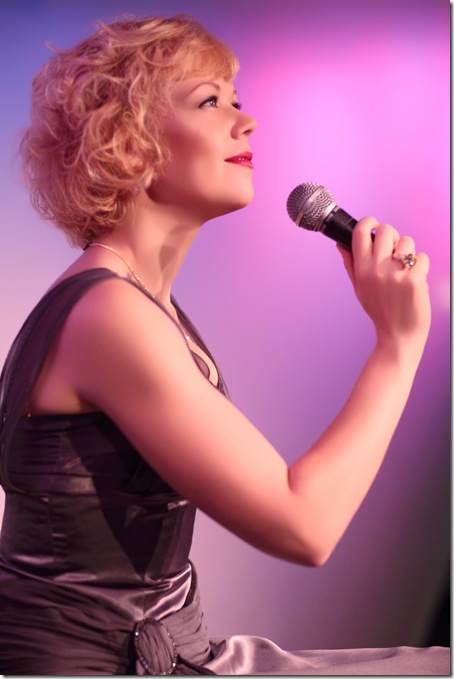 In her Oak Room debut August 30,  brilliant young actress singer Emily Bergl, star of Broadway (Nora Ephron’s "Love, Loss and What I Wore,"), film (“The Rage: Carrie 2”) and TV’s Royal Pains and Desperate Housewives, roars into the Oak Room with more gusto than Hurricane Irene in the her exhilarating act: ”Kidding on the Square.”

A theatrical cabaret-act that transports the audience on a fast-paced ride through love, heartbreak and everything in between, ”Kidding on the Square” is told from the perspective of a modern girl and the eccentric characters she inhabits,

Something old (the Boswell Sisters “We Just Couldn’t Say Goodbye”; something new (Peter Brown & Robert Rans “Material Girl" by way of Madonna); something borrowed ( "Zing! Went the Strings of My Heart" as an evolving Judy Garland); and something blue (as in Bergl’s deliciously compelling version of “Billy Barnes jazz classic Something Cool,”); the show features a rich array of songs that include Roy Orbison’s “Cryin’,” Fats Waller’s “Ain’t Misbehavin’,” a poignant characterization of Rodgers & Hart’s “Ten Cents a Dance as a down-and-out hostess,” Dietz & Schwartz’ Confession” and an unexpected opening number, interpreting Noel Coward’s “Mad About the Boy”  with a serious bent: the lady gets truly angry.

In ”Kidding on the Square,” Bergl does what she does best, which in the case of this hour and fifteen minutes appears to be everything. It comes as no surprise that her acting, where, comedic, dramatic or character is a paragon of perfection, but she looks terrific is a slinky gray “pull apart” gown, that becomes a sexy dress and finally morphs into leotards and tights. Her movement is as controlled as possible in these small quarters. But the big kicker is the voice: A luscious lyric soprano that can go into a metallic chest, when the material demands, as in an hilarious rendition of the vintage Andrews Sisters“Bei Mir Bist Du Schön” that is worth the price of admission.

High points test Ms. Bergl’s. comedic, dramatic and vocal abilities, which she passes with grade “A” marks. Memorable Moments: Pink Martini’s song "Sympathique" from the 1997 album Sympathique,  and you needn’t speak French to get the nuanced meaning.”

Kidding on the Square”  is beautifully directed by Sarna Lapine with G. Scott Lacy as musical director and receives outstanding backup from pianist Jonathan Mastro (Musical director of the hit revival of "Our Town,)" with the talented Ritt Henn on bass and ukulele.

After a fun closing (“Dream a Little Dream of Me,”) Ms. Bergl encores with a heart-wrenching version of the Peggy Lee hit “Is That All There Is.“ And indeed, this is one of the few times in recent memory, we felt that way too about a cabaret act: Absolutely electrifying and not to be missed. Reserve now! The show will run through Saturday September 10th.

Note: The new menu features an amazingly tender and moist Berkshire pork chop that is in step with making the Algonquin kitchen on a par with the atmosphere, entertainment and service one encounters in this truly great New York institution.

Copyright 2011 By Punch In International. All Rights Reserved

Emily Bergl, whose musical studies include classical and contemporary singing, piano and harp, is a rare breed of actress who is at home on the Broadway stage, Hollywood films and television.   She was chosen from a nationwide casting call to play the lead in MGM’s The Rage: Carrie 2, and leads in such independent films as Fur, Chasing Sleep and Happy Campers.    She has appeared on Broadway opposite Laurence Fishburne, Stockard Channing and Gabriel Byrne, and off-Broadway she originated roles in plays by Wendy Wasserstein, Steven Dietz and Christopher Shinn.   On television, she has starred in Stephen Spielberg’s Taken, and has guest-starred on Grey’s Anatomy, The Good Wife, CSI:Miami, two seasons on The Gilmore Girls and as the eccentric  Annie on the ABC comedy Men in Trees.

G. Scott Lacey is a highly sought after musical director, vocal coach and performer, having worked with countless Tony, Emmy, Grammy Award and Golden Globe winning companies and performers.  He has recorded 11 albums,  including the inspirational “A Quiet Place.”

Dark paneled walls, white tablecloths, and a gleaming piano let you know you’re in for a treat at Algonquin’s famous supper club. Come inside and slip back in time to a more glamorous era. Enjoy dinner, then a show. The Oak Room was a launching pad for Harry Connick Jr., Michael Feinstein, Andrea Marcovicci, Diana Krall, Jane Monheit, Peter Cincotti, and Jamie Cullum.